This is an old revision of the document!

TUIO is a simple yet versatile protocol designed specifically to meet the requirements of table-top tangible user interfaces. Inspired by the idea of interconnecting various existing table interfaces such as the reacTable, being developed in Barcelona and the tDesk from Bielefeld University, this protocol defines common properties of controller objects on the table surface as well as of finger and hand gestures performed by the user. 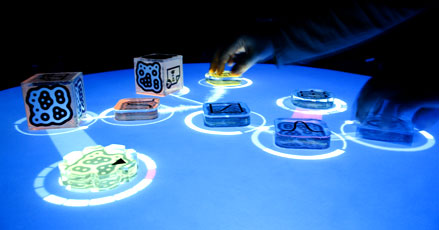 While the reacTable doesn't use OSCulator, it is possible to use the video pattern recognition software reacTIVision with OSCulator very easily.

Here is a non exhaustive list of softwares using the TUIO protocol:

TUIO is a very versatile protocol. Being flexible and rich in its expression, it is also a bit complicated to handle.

OSCulator has been designed to be easy and rather intuitive to use, but is not really compatible with TUIO without some modifications. Sending raw TUIO messages to OSCulator wouldn't be really useful.

This is why OSCulator includes an interpreter that rewrites and give an easy to learn structure to TUIO events.

The TUIO protocol keeps tracks of Cursors and Objects.

There is not much to do than launch the reacTIVision program. This application send OSC message to port 3333 on the local host by default, this means that you will need to change the OSC Input Port in OSCulator to 3333.

As soon as OSCulator receives TUIO messages, it will display them in the main window1). Those message always come in pair:

The positional messages have the following format:

Activity message have only one argument, the activity, being 0 (not visible or not active) or 1 (visible or active).

Positional message have the following arguments:

These are basically the same arguments as given by the TUIO protocol for set messages.