The last sections of this page contains outdated information.

The OSC protocol is designed to send and receive messages that are sent over the network.

On a network a host is a computer or device1), and a port is a number identifying an “input gate” to the host. Such “input gate” that can listen to OSC messages is also called a OSC Server.

When OSCulator is launched and the main window is displayed, an OSC Server is running, enabling the reception of OSC messages. On the other hand, anything that sends OSC messages is called a OSC Client.

Thus, when the OSC Routing event is used, OSCulator also acts as a OSC Client.

Like previously explained, the host is referring to a devices that runs a OSC Server. It can either be the name or the computer (mymacintosh.local.) or an IP Address (192.168.0.1).

The computer which runs OSCulator has a special name localhost and a special IP address 127.0.0.1. You can use either of these if you want to send messages to the current computer itself. This is usually the case when you are running several OSC enabled software on the same computer. For example, OSCulator could listen to OSC messages on port 80002) and Max/MSP could listen on port 9000 with the udpreceive object. They have different port numbers, but the host is the same: localhost.

Note that a unique port number can't be shared by several OSC Servers. This is a limitation of the underlying network protocol which states that a server has one only port that he owns exclusively.

If you need to send messages to another computer, you will need to know its host name. To do this, open the System Preferences and click on the Sharing Preferences Pane item. The computer name is written under Computers on the local network can access your computer at: […].

Control your software and devices

Software like Max/MSP or Reaktor can also receive OSC data. This data is sent over the network, even if it is sent to the same computer that generates the messages.

If you want to control your third-party software, or make some special routing, you can use the OSC Routing event. With this very useful event type, you can route anything to another host and port, even outside on the Internet3).

It is also possible to rewrite OSC messages in order to change their name and arguments during the routing.

Perform these actions while in the main window:

Although the OSC Servers are automatically listed, you may need to manually configure them if you want to perform more complex routing.

With this panel, you can configure the hosts, ports and rewrite address of each destinations. 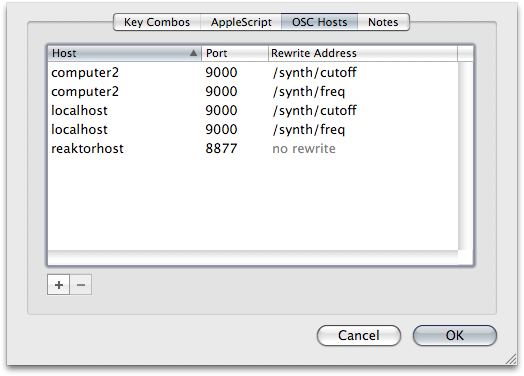 The last one has no rewrite address, because it has been left blank.

Route an OSC message with all its arguments

This picture shows the configuration of a OSC message routing. Here, the message /foo/freq has two arguments.

The destination5) will receive the OSC message /foo/freq with its two arguments.

Route one OSC argument only

Here, we chose to route only the first argument of the OSC message. In this case, the destination will receive a OSC message with a single argument at the address /foo/freq/0.

As you notice, the index of the argument is appended to the destination address. This is needed in order to avoid messages collisions.

When a rewrite address is provided for a destination, its name will appear with an arrow in the Values list:

This example shows that the message /methode.cc will be routed to host localhost on port 9000 and the address will be rewritten as /synth/cutoff.

If a routing is given a rewrite address, it doesn't matter wether it is the whole OSC message or only an argument that is routed: it destination address will always be the same.

Routing to the same document

OSCulator automatically publishes and discover the OSC port on which it is running. This is why the Value menu, always show the OSC destination corresponding to your computer host name and port.

Routing to another document

This is a special case of the routing to another host on the local network.

On the same scheme as the previous section, if you create a new document and work with two windows, you can route messages from one window to another.

1)
like an iPhone or a Lemur
2)
the OSC Server is running on port 8000
3)
if you send OSC to a host that is on internet, you must make sure the destination port is properly routed and that there is no firewall blocking the packets. You must also use either an IP Address or a fully qualified host name, that is a host name with the domain name
4)
click the Parameters button in the toolbar, or choose Parameters in the View menu
5)
in this example, the message will be sent on the same computer, but on port 9000
manual/osc_routing.txt · Last modified: 2010/10/11 16:49 by camille